Louisiana school districts are poised to receive nearly 4x more COVID-19 relief funding under the latest federal relief plan. This aid does come with restrictions in how districts may allocate the funds, but it is a much needed and long overdue step towards a reprieve for our educators and students who have been ‘making it work’ for far too long. We are excited about the possibilities this funding presents, but it is vital that teachers and school employees have a voice in how this money is used. LFT Local affiliate presidents across the state have already begun to address School Boards about the funding priorities for teachers and support staff. If you would like to learn more, please reach out to your Local representatives. 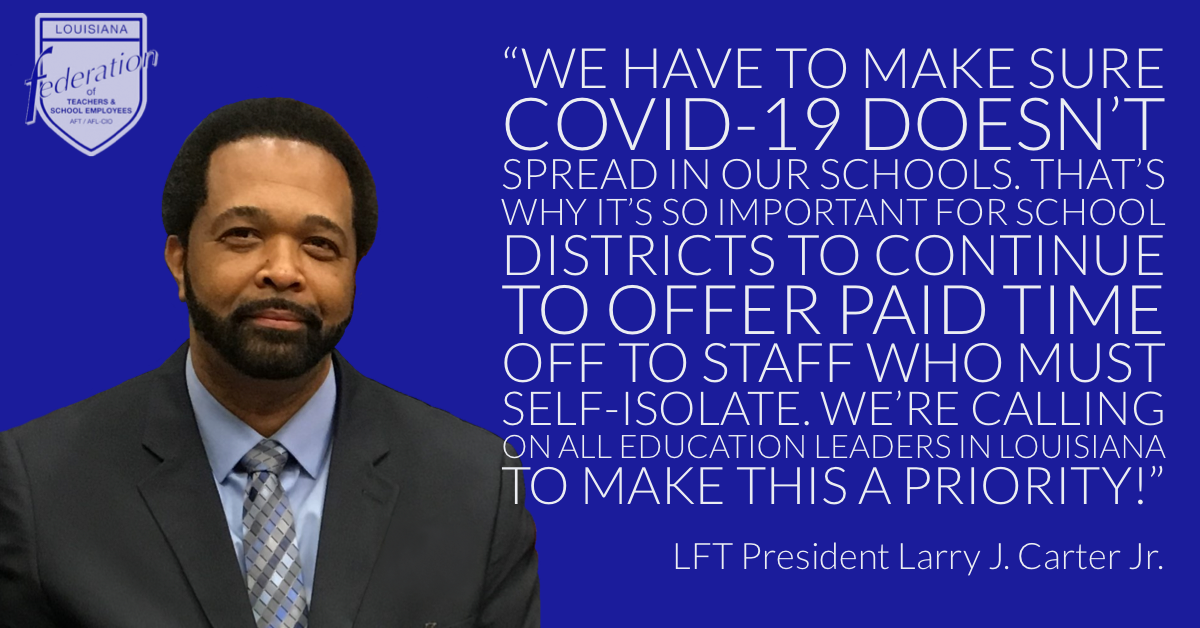 The 2020 CARES Act had a provision that required employers to offer at least 10 days of paid time off to employees who needed to self-isolate after exposure to COVID-19. This was created to deter spread of the virus, incentivize people to stay home if they could be a spreader, and ensure that those who need time to quarantine wouldn’t lose out on their livelihood.
On December 31st this provision of the CARES Act expired and school districts across the state were no longer required to offer designated paid time off for employees to self-isolate after COVID-19 exposure. In December, LFT President Larry Carter wrote to legislators, LDOE officials and the Governor to warn them about this impending crisis, and we have raised the issue multiple times since the new year, but we still have no statewide policy mandating that Local Education Authorities offer these ‘COVID-days’ to school employees. Thanks to the diligent work of Federation Locals across the state, some school districts have decided to continue to offer ‘COVID-days’ to employees, and even more are considering the issue at their upcoming School Board Meetings. To better understand the policies in your district, and join the fight, please contact your Local representatives. 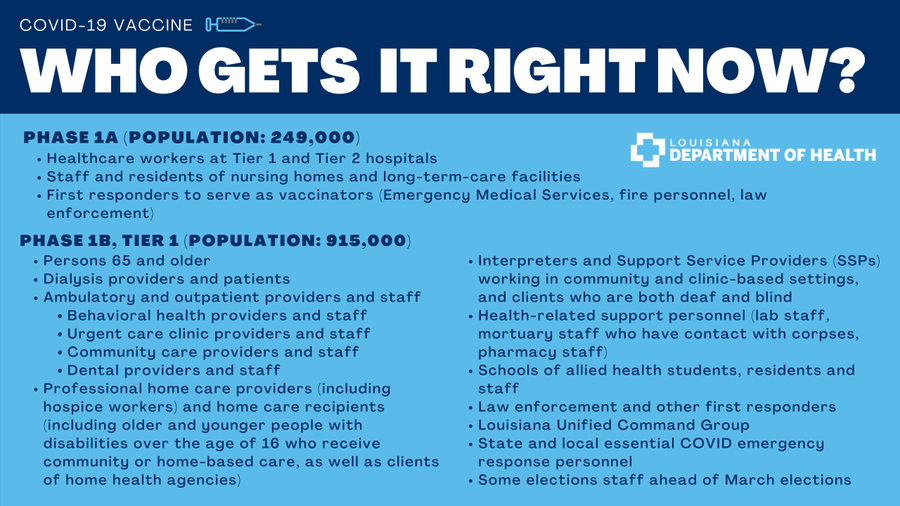 Louisiana has finished the Phase 1A of our vaccine rollout. This included hospital personnel, nursing home/long care facility residents and staff, as well as first responders. Next, they will move on to Phase 1B, Tier 1, which includes 640,000 people in high risk categories.

LFT has consistently insisted that teachers and support staff should receive priority access to the vaccine at no cost, and Department of Education officials agree. Prioritizing the health and safety of our educators is the best way to ensure that schools stay open and that students have access to the finest educational opportunities. We expect that teachers and school employees will be included in a subsequent tier of the priority vaccination plan, but the Louisiana Department of Health has not yet announced specifics.

This month, the Louisiana Board of Elementary and Secondary Education held their regular meeting. You can watch the meeting in its entirety on YouTube. Of particular note, the Louisiana Department of Education presented the results of series of focus groups and surveys meant to help them reflect on the roll out of the 2020-2021 Strong Start Plan and better understand the needs of Louisiana's leaders, educators, students and families. Unfortunately, only 43 teachers and 0 support employees participated in this process. We want to know what you think. Please take this survey, which was designed by the LDOE for Districts, so that we can see if your experiences align with what the School Districts have reported.
The Louisiana Legislature will convene in April, but advisory committees are already considering revenue projections and potential changes to the Minimum Foundation Program. To sign up for text alerts about important updates as they unfold, text LFT to 69238.

While it may feel like Election season just ended, there are in fact very important elections coming up in Louisiana on March 20, 2021. Once the candidates have been vetted, LFT will make endorsements based solely on their approach to public education and worker’s rights as determined by their voting record and responses to our candidate survey. The upcoming elections include:
BESE District 4: Tony Davis has resigned his seat on the State-Wide Board of Elementary and Secondary Education, so there will be a special election to determine his replacement. BESE District 4 includes 10 parishes in Northwest Louisiana (Caddo, Bossier, Webster, DeSoto, Red River, Bienville, Sabine, Natchitoches, Winn, and Vernon).
U.S. Representative 2nd Congressional District: Cedric Richmond has taken a position in the new White House administration and will serve as Senior Advisor to the President. Voters in this district, which contains nearly all of the city of New Orleans and stretches west and north to Baton Rouge, will chose his replacement.
U.S. Representative 5th Congressional District: In December, Luke Letlow defeated Lance Harris to assume Ralph Abraham’s former seat in the U.S. House of Representatives. Unfortunately, later that month, Luke Letlow passed away due to complications from COVID-19. This district, includes rural northeastern Louisiana and much of central Louisiana, as well as the northern part of Louisiana's Florida parishes in southeast Louisiana.
State Representative 82nd Representative District: Freshman Representative Charles Henry resigned his seat in January 2021, a year after assuming office. Voters in Jefferson Parish will determine his replacement on March 20th.

It’s a misconception that Black History Month has only been around since its official designation by President Gerald Ford in 1976. Carter G. Woodson, a Harvard-trained historian and the renowned father of black history in America devoted his life toward advocating for visibility, recognition, and appreciation of the black experience and contributions to American history, culture and society. Pursuing these ambitions, Woodson laid the foundations for Negro History Week (NHW) in 1925. The event was first celebrated in February 1926 and was to coincide with the birthdays of Abraham Lincoln and Frederick Douglass.

Although NHW launched a powerful interest in black culture and representation, by the 1960s, during the civil rights movement, the most popular textbook for eighth-grade U.S. history courses only contained mention of two black people in the entirety of events that had transpired since the Civil War. This dearth of representation surrounding black contributions to society in our education system triggered a revolt against the traditional curriculum that eschewed the achievements of the Black Community. Responding to this, several institutions of higher education began advocating for an official Black History Month as a way to realize the ambitions that Woodson had initially fought for decades earlier. On the 50th anniversary of NHW’s first celebration, the U.S. officially designated February as Black History Month in 1976, and it has been celebrated each year since then.

To learn more about ‘The Roots of a Celebration’ and other resources and lesson plans on Black History, view this compilation on AFT’s Share My Lesson.
SHARE MY LESSON CONFERENCE
AFT's Annual Share My Lesson Professional Development Conference is coming up! Join us March 23-25 for this free, for-credit conference—Share My Lesson’s biggest professional development event of the year. We are welcoming anyone who works with preK-12 students and offering more than 30 high-quality webinars covering topics like virtual learning, hybrid strategies, mental health and trauma-informed practices, current events and racial justice.
Register early and you’ll be entered for a chance to win a virtual learning care package!